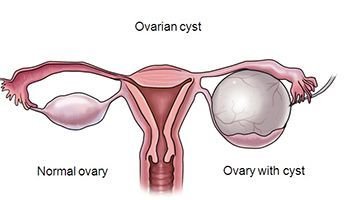 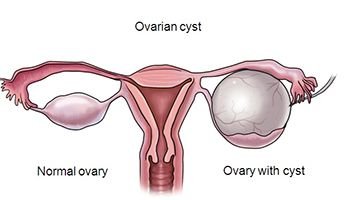 Ovarian cysts are a common condition in women during the childbearing years.  They result when a cyst forms on the ovary.  An ovarian cyst may or may not cause symptoms.  The majority of ovarian cysts go away without treatment.  In some cases, surgery may be necessary to remove large or ongoing cysts.

The ovaries are two small organs that produce eggs and hormones.  The ovaries contain follicles that produce and release an egg each month.  Sometimes a follicle does not break open to release the egg or it closes then seals after an egg is released.  The follicle keeps growing and forms a cyst.  A cyst is a sac-like structure that is filled with fluid or semi-solid material.  Cysts that develop during the normal function of your menstrual cycle are termed functional cysts.

Ovarian cysts can result from the natural function of the menstrual cycle.  A functional cyst may form if the follicle does not open to release an egg or if it seals after an egg is released.  Ovarian cysts are not the same thing as cancerous ovarian tumors or polycystic ovarian disease.  Functional cysts are more common during the childbearing years and rare after menopause.  There are two types of functional cysts, follicular cysts and corpus luteum cysts.

An ovarian cyst may or may not produce symptoms.  An ovarian cyst may cause pelvic pain.  The pain is usually dull and may be constant or come and go.  The pain may spread to your lower back and thighs.  Your pain may increase during sexual intercourse, a bowel movement, or at the beginning or end of your menstrual period.  You may experience abdominal bloating or swelling.  Your periods may change and become longer, shorter, absent, or irregular.

Your doctor may detect an ovarian cyst while performing a pelvic examination.  A doctor may conduct an ultrasound test if an ovarian cyst is suspected.  In some cases, a computed tomography (CT) scan or magnetic resonance imaging (MRI) scan may be used to create images of your ovary.  Additional tests may be ordered to rule out other conditions with similar symptoms.

A laparoscopy is a minimally invasive surgical procedure that uses a laparoscope to view the ovary.  A laparoscope is a type of endoscope.  It consists of a thin tube with a light and viewing instrument.  Images from the laparoscope may be sent to a video monitor.  The images guide the surgeon during the removal of an ovarian cyst.

For women that are not seeking pregnancy, birth control pills may help regulate menstrual cycles and prevent follicle formation.

Large ovarian cysts may twist, rupture, or bleed, causing severe pain.  You should seek immediate medical attention if you experience symptoms of shock, which may include passing out, rapid breathing, dizziness/lightheadedness, weakness, and cold or clammy skin.

An ovarian cyst is a collection of excess fluid in the ovary. The formation of fluid around a developing egg is a normal process in all ovulating women, but sometimes, for reasons doctors do not yet understand, too much fluid is formed. The follicle containing the egg expands, forcing the ovary to expand as well, and this may be experienced as pressure or pain in the pelvic area. On the other hand, some women do not feel the cyst at all, and it may only be discovered during a routine gynecological exam.

The vast majority of ovarian cysts are not cancerous, and most of the time they go away by themselves as the fluid is absorbed back into the body. The formation of new cysts can often be prevented by taking birth control pills.

When do cysts need to be removed?
Rarely, a cyst may not go away and surgery may be needed to remove the cyst.

Treatment options
Since most ovarian cysts in premenopausal women disappear spontaneously, treatment is seldom required. Women who are prone to developing cysts repeatedly may want to use birth control pills to prevent the growth of new cysts until they are ready to bear children.

For cysts that do need to be removed, minimally invasive laparoscopic surgical techniques can now be used to remove these cysts (cystectomy) while preserving the health of the ovary and promising a quick recovery.