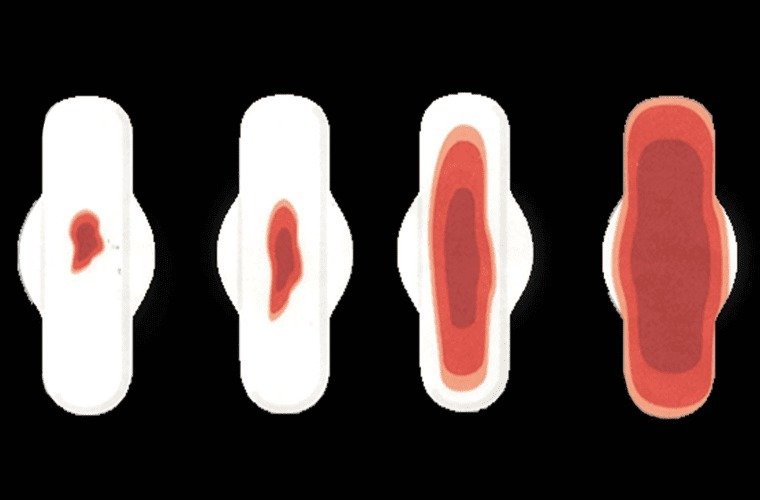 Menorrhagia or hypermorrhea are the medical terms for excessive or prolonged menstrual bleeding.  All females may experience a heavy period at one time or another, but a small number of women experience extremely heavy bleeding, periods that last longer than seven days, or both.  Hormonal imbalances or noncancerous uterine fibroids are the most common cause of menorrhagia.  Menorrhagia is treated with medications or surgery if drug therapy fails.  There are several surgical procedures that may be used, depending on the cause of menorrhagia.

The menstrual cycle is a regular process that is regulated by hormones.  The average menstrual cycle lasts around 28 days, but it varies among individuals and may be either longer or shorter.  Each month the uterine lining thickens as it builds up extra blood and tissue in preparation for a potential fertilized egg.  An egg that is fertilized by a sperm cell may implant itself in the nourishing uterine lining and develop into a baby.  An unfertilized egg or a fertilized egg that does not implant in the uterus passes through the reproductive system.  During menstruation prostaglandins, a hormone-like substance, cause the uterus to contract.  The uterine lining sheds and the blood leaves the body through the vagina.

Menorrhagia causes extremely heavy menstrual bleeding.  The bleeding is heavy enough to soak through one or more sanitary pad or tampon every half-hour for several hours.  You may need to change your pad during the night.  Your menstrual flow may contain large blood clots.  Your periods may last longer than seven days or be irregular.  You may experience constant pain in your lower abdomen during your periods.  Substantial blood loss may lead to anemia.  Symptoms of anemia include feeling tired, shortness of breath, and a pale complexion.

Your doctor will conduct a physical examination and some tests.  Your blood may be tested for abnormalities, such as anemia.  A Pap smear may be used to test your cervix for abnormal or cancerous cells.  An endometrial biopsy may be used to obtain cell samples from your uterus for examination.

Imaging tests may be conducted to help identify abnormal growths.  An ultrasound uses sound waves to create pictures of your internal organs.  A sonohysterogram uses ultrasound after fluid is inserted into your uterus.  A sonohysterogram is used to identify problems with the uterine lining.  A hysterosalpingography is used to evaluate the size of your uterus and fallopian tubes.  This test involves using an injected dye to highlight X-ray images.

Your doctor will rule out other conditions that have similar symptoms to menorrhagia.  For instance, a one-time late heavy period may be an early miscarriage.  An ectopic pregnancy may cause heavy bleeding.  An ectopic pregnancy is a serious complication that results when the fertilized egg implants in the fallopian tube instead of the uterus.

The treatment that you receive depends on many factors, including the extent and cause of your condition.  Your doctor may recommend iron supplements and non-steroidal anti-inflammatory drugs (NSAIDs).  NSAIDs, such as ibuprofen, aspirin, or naproxen act as prostaglandin inhibitors and can relieve symptoms.  Birth control pills or the hormone progesterone may be used to reduce menorrhagia.

Surgery may be needed if drug therapy fails or if there is an underlying condition that needs to be treated.  There are several surgical options.  The type of intervention that you receive may depend on the type of underlying condition that you have.  It is important that you understand the long-term consequences of the procedures before you make a decision.  Your doctor can provide you with a thorough explanation of all of your options to help you decide what is best for you.  Common surgical procedures for menorrhagia include dilation and cutterage (D&C), operative hysteroscopy, endometrial ablation, endometrial resection, and hysterectomy.

A D&C is a common procedure used to reduce menstrual bleeding.  A surgeon can use a suction or scrape method to remove the lining of the uterus.  The procedure may need to be repeated over time.  An ultrasound may used to guide the surgeon to the exact area in question.

You may be able to reduce your risk for menorrhagia by eliminating the risk factors that you can control.  You may be able to prevent pelvic inflammatory disease by avoiding contact with sexually transmitted disease.  The can be achieved by abstinence.  Female or male condoms may help reduce the spread of some types of sexually transmitted diseases.

Iron deficiency anemia is a common type of anemia that is caused by menorrhagia.  Severe cramps (dysmenorrhea) may accompany heavy bleeding.  The hormone imbalances and irregular periods associated with menorrhagia may contribute to infertility.

NovaSure® is a newer treatment for menorrhagia.  It is a quick, safe, simple, one-time endometrial ablation treatment. It is an alternative to hysterectomy.  NovaSure gently removes the lining of the uterus with precisely measured electrical energy.  This quick simple procedure is performed as an in-office procedure and generally takes less than 5 minutes.  Unlike other ablation methods or hysterectomy, NovaSure does not involve hormones and has a quick recovery time—most women return to their regular activities the next day.

Heavy menstrual bleeding is classified as bleeding that soaks through a sanitary pad or tampon every hour for more than a few hours over a period of seven or more days. It is a common form of abnormal uterine bleeding.

Abnormal uterine bleeding affects an estimated 30% of women at some point during their lives. Hormonal changes are often the cause in teenagers during the 1 to 1 ½ years following their first period, as well as in women in their 40s and 50s who are approaching menopause. In general, heavy menstrual bleeding is more common among older women than among younger women. One study found that nearly 40% of women between the ages of 45 and 60 experienced abnormally heavy periods.

Causes
Besides hormonal changes, other causes of abnormal bleeding are fibroids, ovarian cysts, uterine or cervical polyps, and overgrowth of the uterine lining cells, called “hyperplasia.”  All of these can be easily and effectively treated.  Very rarely, abnormal uterine bleeding signals precancer or cancer of the uterus.

Up to 15% of women who have heavy menstrual bleeding may have an undiagnosed bleeding disorder called von Willebrand’s disease, an inherited condition in which the blood lacks certain factors needed for proper clotting. Von Willebrand’s disease may be likened to a very mild form of hemophilia and must be treated with the appropriate clotting factors. It is important to get a proper diagnosis of the cause of abnormal bleeding, because the treatments for heavy menstrual bleeding will not work if the true cause is a bleeding disorder.

In younger women, treatment with hormones almost always solves the problem. However, if bleeding persists after medical therapy has been tried, certain tests can be used to determine the cause. These include hysteroscopy, D&C,  endometrial biopsy,  sonogram and  saline-infusion sonogram.

The appropriate treatment is determined by the underlying cause of the bleeding. If abnormal bleeding is due to fibroids, resectoscopic myomectomy may be appropriate. If it is due to polyps or hyperplasia, a D&C may correct the problem. In some women, abnormal bleeding may persist even after hormonal treatment, medical therapy or a D&C. Sometimes this is due to changes in the uterine muscle wall or the uterine lining. For those who do not wish to have children and for whom the abnormal bleeding is severe enough to cause anemia, a technique called endometrial ablation may be the right choice.

Hysterectomy should only be used as a last resort, after other approaches have failed, or when appropriate to eradicate uterine cancer.

It is important to discuss all treatment options with your doctor.